(Note – this story may mean more to you if you’ve read my previous blog, The Gift of the Osprey.)

The morning of May 15th, 2015, I was awakened by a call from an old friend, with the sad news that B.B. King had died the night before. I knew he’d been sick, and that he was at home in hospice at 89. Still, having known him and his amazing resilience since 1978, it didn’t seem possible. It was always a long time between our visits, yet, like his song said, it somehow happened that “There is always one more time.” But no more. 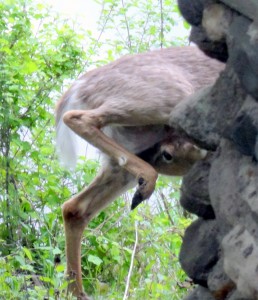 I was glad I had plans for coffee with friends and then riding with my dear friend Mary on her great horses. No time for grief. Coming home, I feared it would hit me, and decided to walk around the yard looking for fawns or morels, since it was the season for both. I didn’t see either, but there was a doe, just west of my little wooden bridge. She was not alarmed at all, until she saw little black Lucky and heard her meowing. Then she came toward us – 10 feet, then another 10 feet. Hmm. I let Lucky in the house. The doe was calmer now, and I wondered if she was looking for a spot to drop a fawn. When she lifted her leg and licked back there, I was hopeful. There’s nothing like birth to take the sting out of death.

I walked down to the shore, and there came a great blue heron from across the lake. As it flew over my head, I clearly saw a gap in its wing. It was missing a feather or two. I smiled and thought, if any bird could represent the spirit of the King of the Blues, it would be GREAT and BLUE, flying around the world. Was this one blessing me? Had it dropped me a feather, as the osprey did? I never found the heron’s feather, but when I saw the many tributes online and on television, and heard that Mr. King’s downloads had increased 10,000% in one day, I knew. Just as the osprey told me Mom would keep blessing me when she’s gone, B.B. King would keep blessing us all with his music and his words. And now he was as free as this beautiful bird.

The next morning, I could see the answer to my prayer from the living room window. A new fawn, just 15 feet from the deck. The doe was back in her spot by the bridge, happily chewing her cud. 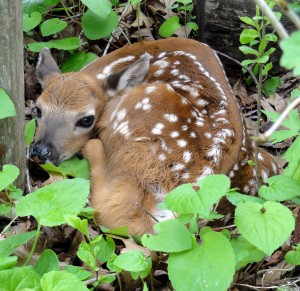 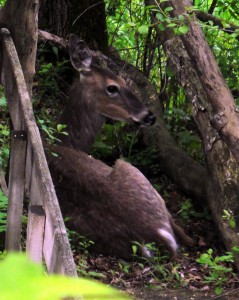 Four months later, September 16th, would have been B.B.’s 90th birthday. I was looking for the best way to celebrate and honor him. The Heritage Blues Band at the Dakota? To Kill a Mockingbird at the Guthrie? I was feeling sad, hot, and undecided. Time to jump in the lake. I did. 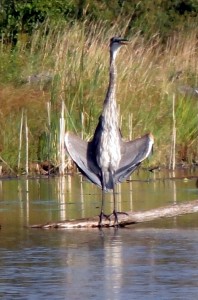 But nearing the middle, I saw a great blue heron on the other shore. Could it be the one that flew over when B died? Could I possibly get a picture to share? My mind whispered, “Please stay” as I swam back to my shore. Herons are so shy, I knew it was unlikely, but I had to try. I ran up the hill, grabbed my camera and binoculars, and ran back down to my canoe. He was still there. “Thank you!”

I paddled quietly, keeping my eye on the long-legged bird, fighting the wind and taking pictures as I went. Long distance was better than nothing, and he was not likely to let me get very close. They never do. 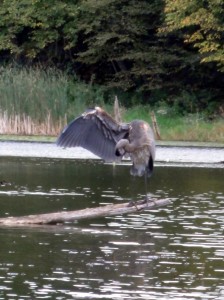 But this one did. I approached so very slowly, stopping often to take pictures, and to study him through the binoculars. But also to just gaze, to connect, unseparated by lenses or screens. To be still, and to say a silent “Thank you! You’re beautiful! I love you!” He was serene, though the wind ruffled his feathers as he preened himself. He showed me the soft secrets under his wings while he soaked up the sun (and under his tail as he jabbed at frogs!) Wonderful. Yes, he filled me with wonder. I paddled closer until I was only about 50′ from him. Still, he seemed not to care. 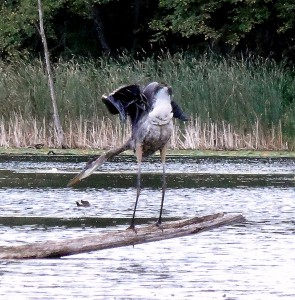 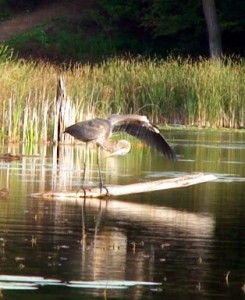 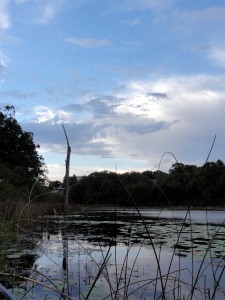 The clouds rolled in and made the sky even more lovely. Only when it began to rain did my new friend take off for the other side of the lake. There, he danced on the shore and waved his magnificent wings high in the air, the soft light bringing out his many blues. Was he rejoicing in the cooling rain as much as I was? Then he disappeared. I didn’t see him fly off, so I paddled to the spot where he had stood just a moment ago. Perhaps he was hunkered down in the long reeds, but I sure couldn’t see him. Did he evaporate, as the deer so often do, into the woods? 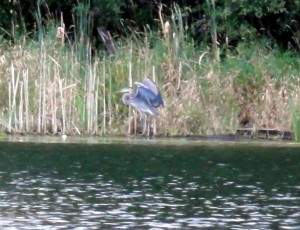 Wherever he was, it was okay. He’d given me much more than I expected, and it was time to go in. Happily. I looked at my camera. It had been an hour and ten minutes, and he’d granted me 104 pictures and ten videos. (I smile as I recall how incredibly patient B.B. was with millions of fans begging for pictures with him over seventy years – me included!) I was glad I hadn’t planned to go to the play and missed this special time. I still could have gone to the Dakota, but I had no need to. I knew I was where I was supposed to be, celebrating B as he would have liked, and I just wanted to savor it some more.

The rain and wind were marvelously cool and soft, and I felt the same. 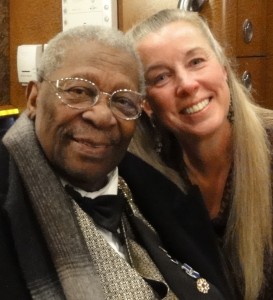 I couldn’t wait to call my mother. She was delighted to hear about the heron, and felt that B must have sent it for me. I swear, I’ll never have anyone who listens to my adventures and is as happy for me as Mom is. And no one like B and his extraordinary music, wisdom, and stories, either. But I will have the children of Mother Nature to comfort and teach me. Who knows where these graceful spirits in fur and feathers come from, or why? No matter. There is some kind of magic there. They are – full of grace – great, great blessings for which I am grateful beyond words.

In this time of holiday hustle and bustle, of shopping and bopping through screens and stores, I wish you the best of all gifts – family, friends, music, and quiet times close to the earth.