This spectacular sunset is the closest I have to a picture of the Bible’s burning bush. Years ago, I got involved in a small, but bitter, political fight. It was extremely hard for me, but environmental concerns compelled me to fight for what I loved and believed in. During sleepless nights, I reminded myself of how Paul and Sheila Wellstone spoke truth to power. Someone said they were like the Bible’s burning bush, on fire for their causes, but never consumed. They fought like hell for what they believed in, but could socialize and laugh with their adversaries at the end of the day.

I’ll never achieve their political skill, but I hold on to that image when I am pushed to speak up on important matters. Like the frigid day I went to sit in the hot tub at the Y. I had just gotten in when a man started chatting with me. I wasn’t in the mood, but was friendly and smiled… until he started talking – no, gloating – about Trump coming into office. I quietly said, “You’re happy now, we’ll see later.” When he started boasting about how great it will be in four, and eight years, I just had to say more. “You said you had a daughter who’s a teacher. Is it really okay with you that Trump abuses women?” Of course he went into the “Clinton was worse” line. I pointed out that one was a mistake, a seduction, and he apologized for it. The other was assault and he bragged about it. Big difference. Not to mention the many times Trump verbally disrespected women, clearly treating them as sexual objects.

After a couple similar exchanges, I told him I didn’t want to argue. I’d come there to relax. But when I closed my eyes and sank a bit deeper into the bubbling warmth, I thought about the African American man who had joined us there. Though the braggart hadn’t actually said anything racist, I was pretty sure the black man must be feeling as uncomfortable with him as I was. Then I flashed back to a time – the only time – when I was verbally attacked for being white. What could have been a devastating public embarrassment (I’m told my face showed the horror) turned into a blessing I’ll never forget. Before another word could come from the old woman’s mouth, I was surrounded by black friends. “Don’t listen to her… she’s crazy… we love you… you’re one of us… we’re so sorry you had to hear that…” and more. That memory gave me the courage to open my eyes and turn to the laughing man.

“So, do you think Trump is racist?”

“Not when the people coming across the border are rapists and drug dealers.”

“I was thinking of when he and his father wouldn’t let blacks rent their apartments. Is that okay?”

“It depends on what they were doing to the apartment.”

“They never had a chance. Their applications were marked with a “C” for colored and they couldn’t even look at one. Is that okay?”

He was quiet, then “But you have to admit he’s a great businessman!”

“Really? You have no idea what he has because he won’t show his tax returns. Years ago the banks kept his name on buildings he’d lost, just for recognizability. He brags that he doesn’t pay taxes. That means he either lost a lot of money, gave a lot away, or cheated. And we know his foundation rarely gives anything away. In fact, he sometimes doesn’t even pay his workers, and clearly took money from innocent college students at his so-called university. Is that okay?”

It went on like this until he left, perhaps not humbled, but seemingly less inflated and obnoxious. The black man crossed the pool and sat by me, with a quiet word of solidarity. He’d grown up in Arkansas and was all too familiar with that kind of man. We shared our frustrations, but then spoke of the gospel music we both loved, sang, and wrote, and found we had friends in common. We laughed, he softly sang, and our spirits were lifted. I’ll probably never see either of them again, but I will remember that night – another bitter taste turned sweet.

I’m not a fighter, until backed into a corner or standing up for what I believe. That encounter with the brash man was not fun. But I slept well that night, knowing I’d done the right thing. Did I change him, or at least make him think a little? Will he be a little less likely to spout off to strangers? Who knows. But the others in the pool heard me challenge him, armed with facts and calm. Maybe, when they are in a similar situation, it will be easier to speak up. I know it will be for me.

I never intended my blog to be about politics, but these days, it infuses our lives. While people have asked me to put more of my cards on my website, I also have friends thanking me for sharing that story. I wrestled with which is more important. Then I heard Meryl Streep quote Carrie Fisher: “Take your broken heart, make it into art.” And I realized I don’t have to choose. My art is about life. And it is often the best expression of my beliefs. So, for the record, and in case you missed them, here are a few of my cards. I hope they comfort you as they do me, and encourage you to speak your truth, whether in words or art.


I am so grateful!

For skies of sun and rain

for critters wild and tame

for songs of orchestra or bird

my mother’s smile and “I love you”

but smiles of strangers bless me, too

so whether you are far or near

I appreciate you all…

We have so much to be thankful for, including all the talented comedians who point out how ridiculous some of the actors in this drama are. When I think of them as the turkeys they are (“a stupid or inept person” – Oxford Dictionary) I feel less afraid and more sure they will fade into the cautionary annals of history. 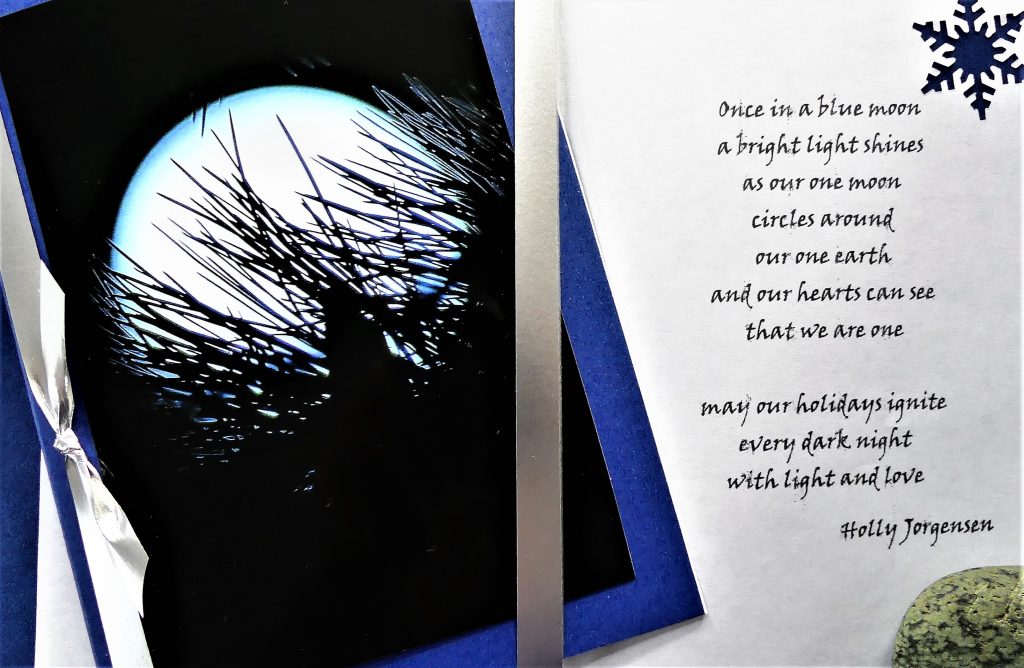 America has been humbled, by both our actions and inaction. I hope we can all accept some of that humility and really listen to those of other faiths, colors, orientations, and differing political points of view.

As always, I will look to nature for beauty, joy, strength, and solace.