Many of you read “The Gift of the Osprey” (my blog post of August 30, 2015) and know that Mom had long been ready to fly off as an angel, and excitedly told me she’d drop me a feather and a blessing. So when she finally made it out of here on April 25th, friends started asking me, “Has she dropped you a feather yet?”

You probably also know that Nature is my Other Mother. So I wasn’t too surprised when, after Mom’s celebration of life, I came home to find friends greeting me as I swam in my lake. Two grand birds soaring high—eagles or vultures? Either would be symbolic, as both eat carrion, turning the dead into new energy. 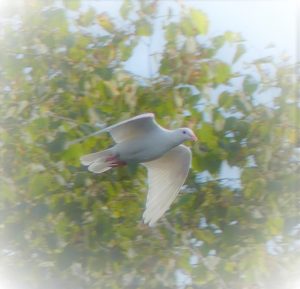 A white dove, just like the one we released ten years ago at Dad’s celebration, circled over me. Dad? Is that you? Or Mom, going to join Dad? Or (smile) just one of the many white doves my neighbors John and Marsha released at another event that day, returning home to roost? Whatever it was, it made me cry happy tears. The contrail of a jet shone brilliantly as it shot upward toward the sun. That had to be Dad, the lifelong aviator, ecstatically welcoming Mom! Then swallows, catching the sun on their golden breasts as they swooped, and a perfect row of 16 geese flying over with that wonderful sound of swishing wings. But the best, as I reached the middle of our little lake, was a beautiful great blue heron that dipped gracefully over me. Was that B saying Mom’s there with him and Dad now? (See “The Gifts of the Great Blue Heron and the Great Blues Man.”) No matter the source, each was a generous blessing. Then who shows up but the goose family that had been visiting me daily. So I called to them, and they followed me to the dock for a little picnic of corn. It was the perfect closing to the long vigil with Mom and the busy preparation and day of her celebration. I finally relaxed. 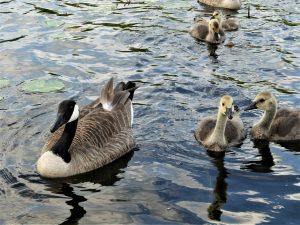 It was a week later when Father Goose showed up with one of his wing feathers askew, time to molt and grow new ones for the migration. So I told him it would be nice if he dropped it here for me, but I felt silly, knowing that was pretty unlikely, since they traveled a wide range over this lake and the next. Even if he dropped it here, it would surely drift away or into the cattails. Oh, well. But I did take a good look at it, just in case. 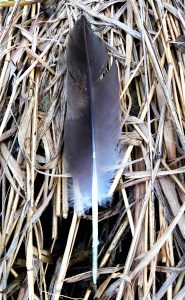 The next day I went down to the dock for my swim late, not thinking about the geese or feather. But as I walked by the loon nesting platform (waiting to be anchored further out) I couldn’t help but notice a feather. The feather. Looking not at all dropped, but as if it had been carefully, artfully, deliberately placed so that I’d know Mom put it there. Astonished, I imagined her smiling as I kissed it, then dove in for my swim. 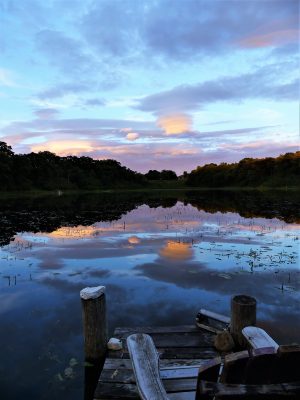 I couldn’t take my eyes off the sky. Another shining contrail heading up to heaven. Golden clouds in the west, deep blue ones in the east that morphed into – an angel. Really! A broad skirt, two outstretched wings, a round head crowned with a halo turning gold. Of course, by the time I got back to the dock to take pictures, the clouds had drifted. But they were still beautiful, and kept changing. I brought the feather in, and looked forward to telling people about it and the angel. But did I really believe they were sent by Mom?”

It’s been over two months since that extraordinary day. The feather still lies on my table, but the geese are gone. Their strong new feathers carried them into the sky, where they joined other families preparing to migrate. I miss them, as I miss Mom. 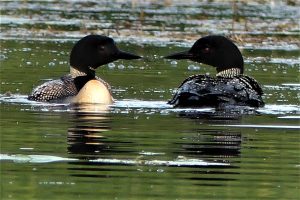 But then a pair of loons came, one with a rare golden breast. They flirted, danced, and hooted for hours while I took their pictures. A doe stood on the shore, nursing her fawn, and soothing my heart, as I watched from my canoe. 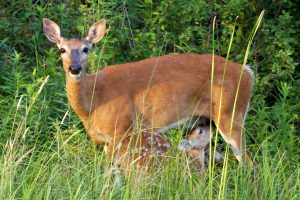 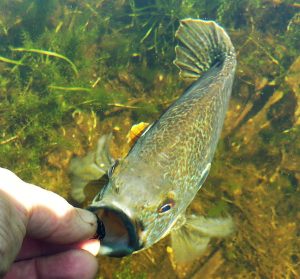 sunfish Greenie finally left the nest he’d been cleaning and guarding for so long. I hope he avoids the hooks and returns for a third summer with me. But now I have a new green friend—a tree frog. He sits on my kitchen window every night, as calm as a little Buddha, even with the clatter of dishes and my chattering to him.

Could all, or any of these, really be signs from Mom? I don’t know. But they are daily reminders of the constant change that is life. One season after another. Life inevitably moving on to death to make room for the next joyful birth. While both ancient and modern cultures speak of the presence of ancestors in nature, scientists tell us that the same DNA exists in all living beings. That nothing—matter or energy—is ever lost. As Joni Mitchell put it, “We are stardust, billion year old carbon.” 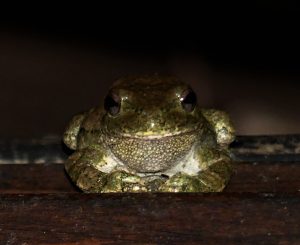 I asked my friend Susan to talk about this, since she has a gift for seeing the mystical. She told me about Alice, an old woman she grew close to while working in a nursing home. Alice had a potty mouth but a sweet heart. On her deathbed, her eyes grew wide and she softly said “I am the wind, the sun, and the flower!” Susan, amazed, asked her, “Are you becoming one with the universe?” Alice gently nodded—yes.